Before he left the country of his birth (England) at the age of 19, David Richardson had already helped one company to integrate its operations with IT. That was 26 years ago, but it was definitely the first step on a long road to his latest enterprise.

Beezer.com.au, a niche technology and gift ideas pure play retailer, was opened barely more than a few weeks ago, but it is already performing better than its founder could have hoped.

“We saw six sales in the first week, with a good quantity of unique visitors each day,” says Richardson. “SEO was working well with both long-tail and short-tail keywords finding us in Google. It’s definitely surpassed my expectations so far.”

Power Retail spoke to Richardson in order to gain a deeper insight into his novel career path, as well as finding out a little about his plans for Beezer.com.au.

How did you get started in web development and retail in general?

After I left school in England, I worked for an imports and distributions company that sourced sewing machines. They put me in an internship there, where I was fortunate enough to worth with a Swiss Technician. Together we were tasked with taking the company’s systems onto a digital format, and this was years before the internet even existed in a commercial format, back in 1985.

When I started in Australia I worked a number of retail jobs, including Kathmandu and sporting goods wholesaler, Powerbrands. It gave me a lot of knowledge in terms of customer service, but I’m a creative person as well. I eventually stopped all of that to do a course on graphic design.

I worked in the graphic design industry for a year or so before swinging back towards sales and marketing once more. It was around 13 years ago that I started my own web design business in Sydney. It was during the time of the first dot-com boom when Australia retailers were just starting to ask, “What is a website? Do I need one?”. I took it upon myself then to learn web design.

Really, I got lucky when we somehow landed a big client to build our first e-commerce enabled site, for a greeting card company. It was a $100,000 plus job, which was way beyond anything I knew how to do back then. Luckily, I happened to know Steve Fanale, who ran Mass Media, and he was able to make a deal with me. He employed me on the condition that I brought the client with me to Mass Media.This was how I was able to learn the ropes of project management and e-commerce. I learnt a lot from Steve, he was the ultimate professional.

It seems like a long road to take to arrive at e-commerce. What is it about this industry that you like so much?

I left my last job at the end of 2011, where I’d been developing and redeveloping an e-commerce site for a camera store. All the arrows were pointing to online, but I wanted to spend some time thinking about what really makes me happy.

I ended up deciding it was a combination of things that I liked. I do enjoy sales, either face-to-face or online, and I enjoy building a brand and marketing. I really enjoy the online space. The notion that online sales is a cold, faceless tool that everyone maligns it to be has always bugged me, I prefer to think that it does have a life/energy unto itself. An e-commerce site is constantly changing and evolving. You can feed it and it thrives with that energy. Consumers can somehow sense that energy just by looking at your website.

It’s a real art and that intrigues me a lot.

Where did the name Beezer come from?

It took many many hours of searching dictionaries, slang dictionaries, thesauruses and word creation tools to find it. It’s actually an old irish slang word meaning “cool”. I loved the word itself as it firstly had the magic double vowel but also it just sounded so Australian; it’s a Beezer, mate!

Beezer.com.au sells niche products, mostly technology and gift ideas. Why did you choose these categories for Beezer?

I have watched the online retail market in Australia over the past ten years and I saw the real success stories. Yet whenever it came to gift shopping, I would visit these big successful sites and I’d think, “You know what? They’re all doing the same kind of stuff and very little of it is good stuff”.

They were all peddling the same gear, but not only that – they were all peddling against each other. Where are the margins for these stores? It seemed like the industry had gone backward to outdated notions of a business model based on ‘picture and price’ and not presenting the product itself in its very best light. I don’t enjoy that experience. I don’t think other people really enjoy that experience either.

Because of this, my idea was to pick products you don’t see everywhere else and add them to a mixture of other products that wouldn’t normally be grouped together, but in a way that makes sense because they share the same qualities. I wanted to choose products that are well built, well designed, functional and cool. That was the idea to begin with, it was just a case of finding all that product.

How did you go about sourcing your product?

The internet is a wonderful place. I spent a lot of time researching online, placing phone calls. I looked at other sites to see what they were stocking and spent hours on Facebook, Twitter, The Fancy and Pinterest trying to find out what products people were talking about. After that, it was a case of looking up distributors, vendors and manufacturers. Researching the supply chain I found was easily done from home.

It will be a two year journey to actually get the product mix right, I believe. There have been some compromises as well, just to get the range together. Some products I’ve had to say, “Well it doesn’t fit 100 percent with what I want to do, but I have to get some product out there initially”. It became apparent very quickly that a lot of the really cool stuff comes from Europe, from the Scandinavians and the Japanese. I just love their product design, but a lot of them are just not represented here yet.

What platform do you use for Beezer.com.au? Why did you decide on that particular option?

I’ve had a lot of experience with Magento in my previous roles in other companies. Community, Enterprise and Go editions, as well as Joomla/Virtuemart and even IBM. It was my preference to use Magento’s Enterprise platform. Unfortunately, it’s a $10,000 per year license and our initial business plan includes keeping costs as low as possible.

I figured I would always come back to Magento as soon as it was fiscally viable, but for the meantime I went shopping for an alternative. I spent the first six to eight weeks of the project signing up for and testing out every hosted solution I came across. I wanted to witness their back-ends, how they functioned and to get involved with their support communities. For most of them, I actually paid the first month and went about building the website. With just a basic knowledge of HTML and CSS I was able to work most of them out.

Shopify just launched itself head and shoulders above the rest. It contains its own proprietary code called Liquid, that allows you to write basic logic statements into it. It just made sense to me immediately. What Shopify brought to the table was a stripped-down, lean, e-commerce machine. It doesn’t give you too much to play around with, hence you don’t waste too much time playing around with it.

One stand-out feature that really hooked me is their handling of the checkout page. The retailer can design and define the shopping cart comprehensively, but when it comes to the checkout, Shopify only allow a few changes, like payment methods. You can’t customise the page itself. The reason they control it is that on the lower plans, Shopify collects a percentage of sales. It’s only one or two percent, depending on what plan the retailer’s signed up for. Their theory is, “We’re not going to let people who don’t know what they’re doing mess up conversions with a bad checkout page, because that’s money we’re losing too”. I like the idea that the experts control that aspect for you.

Everything in front of the checkout page is totally customisable and incredibly well supported. Shopify’s community is at least as passionate as Magento’s, even if it isn’t quite as large. Their cataloge of templates is very good and they are often built on the latest versions of HTML and CSS giving you the best chance of efficient SEO.

What does the future hold for Beezer.com.au?

I’d like to think that the brand will symbolize coolness when it comes to gifts from any category. An eclectic mix of products that are just so tempting that there will always be something you will want.

I also feel that there is an opportunity for a retailer to redefine what online retail can do for a brand. At present online retailers are suffering under the stigma that they will bastardize a brand by discounting it too much or not providing the right level of service. Beezer’s aim is to be the opposite, to put each and every product on a pedestal and represent it as well as, if not better than the brand itself. It’s a noble pursuit, but one I think is worthy of my time and efforts because the end result is a retail destination that consumers will enjoy visiting and hopefully shopping at.

For more information on how to start your own store online, see Power Retail’s Getting Started section.

Campbell is a content creator for The Media Pad, publisher of Power Retail. He has a background in science communication and a long history in retail. Campbell has a keen interest in emerging technologies and their impact in the world of media and online retail. Campbell is an indoor sports junkie, to the point of playing in a local dodgeball competition once a week, “just for kicks”.

I am using the object manager (directly and intentionally) to get the sales quantity of a product. $objectManager = MagentoFrameworkAppObjectManager::getInstance(); $product_id = […] 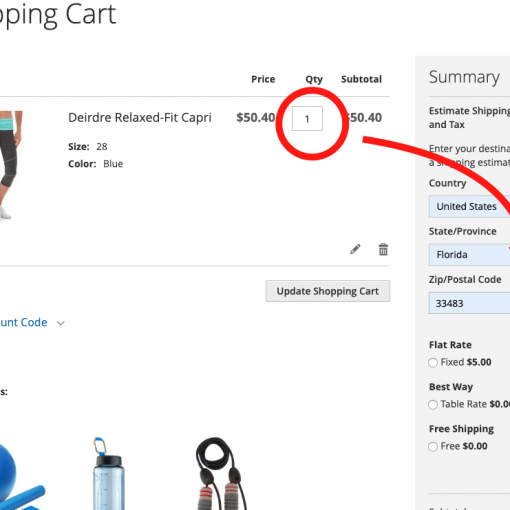 When I update the product qty in the cart page I want to have the shipping rates estimated again via AJAX, how […]

I’ve noticed there’s quite a bit of misunderstanding among .NET developers as to what Ruby or Rails are, and how those compare […]